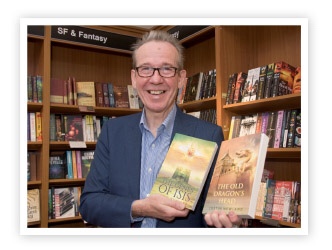 From the author of Genes of Isis, Justin Newland, has wowed me yet again. The Old Dragon’s Head was written beautifully, and captivated me from the first sentence.

Constructed of stone and packed earth, the Great Wall of 10,000 li protects China’s northern borders from the threat of Mongol incursion. The wall is also home to a supernatural beast: the Old Dragon. The Old Dragon’s Head is the most easterly point of the wall, where it finally meets the sea.

In every era, a Dragon Master is born. Endowed with the powers of Heaven, only he can summon the Old Dragon so long as he possess the dragon pearl.

It’s the year 1400, and neither the Old Dragon, the dragon pearl, nor the Dragon Master, has been seen for twenty years. Bolin, a young man working on the Old Dragon’s Head, suffers visions of ghosts. Folk believe he has yin-yang eyes and other paranormal fights. When Bolin’s fief lord, the Prince of Yan, rebels against his nephew, the Jianwen Emperor, a bitter war of succession ensues in which the Mongols hold the balance of power. While the victor might win the battle on earth, China’s Dragon Throne can only be earned with a Mandate from heaven – and the support of the Old Dragon.

Bolin embarks on a journey of self-discovery, mirroring Old China’s endeavor to come of age. When Bolin accepts his destiny as the Dragon Master, Heaven sends a third coming of age – for humanity itself. But are any of them ready for what is rising in the east?

I have never read a book such as this before. It kept my attention from the first sentence, and I could not put down my iPad. I love the way Justin writes, and he never fails to amaze me.

I give The Old Dragon’s Head 5 stars. The characters, the setting, the accuracy, everything, was amazing.

You can follow Justin on the following sites to see what he is up to: